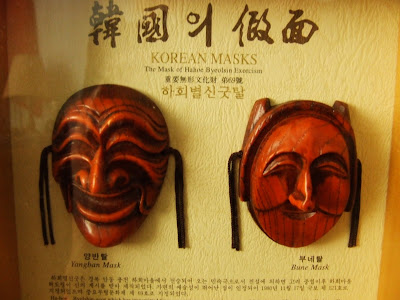 Korean Masks of Hahoe Bycolsin Exorcism (in minature form).
It is believed these masks are used in a folk drama from the Fourteenth century and have been transmitted from generation to generation and because of their aesethic value and artistic quality have been declared a National Cultural Asset.
Religious and court dances have been among the Korean traditions. In other instances, behind the masks, the ordinary people poke fun at the ruling class or gesture in mock imitation of the Buddhist monks and of the aristocratic gentlement and others. A shaman kut (exorcism) is performed before a mask play begins.
I suppose these days the main exponents would be from select groups of performers as traditions give way to modern life.
Posted by julia at 5:30 am