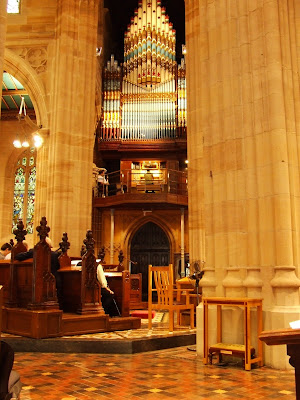 St Andrew's Cathedral, Sydney, where a dynamic recital on the pipe organ was given by student Jessica Lim who was Highly Commended, Junior and Intermediate Sections, Sydney Organ Competition 2008.

Today, the liturgy in Newcastle was highlighted by a setting composed by Greg Smith who is a musician and organist at the Sacred Heart Cathedral.
A professional organist is indeed a treasure. Their music takes away the potential stress that is inherent when congregation and music join forces although positive experiences are come upon.

William Hill and Son built the original 1866 organ for St Andrew's, with later additions and alterations by several other makers. Orgues Letorneau Ltee, Ste Hyacinthe, Quebec completed the most recent work in 1998. The organ was restored to display Blacket's (colonial architect) original highly coloured decorations, including an unusual wrought iron framework. The instrument has been moved from the opposite side of the building. Full compliment of playing aids including 8 general, adjustable crescendo pedal & 64 channel sequencer. Electric Action to drawstops. Mechanical Action to manuals. Manual IV and pedal: electropneumatic. Electrical coupling. Compass 58/30.

I removed two spams about shoes.

Shoes today tomorrow who knows. I hate spammers. It's such an spectacular golden image to go with the text