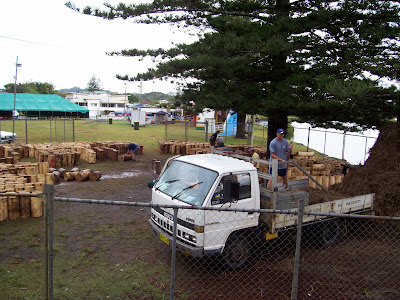 Festival at Brunswick Heads (far north coast). It's holiday time and wanderlust is around. From the past is a prosaic photo but the Fish and Chips Festival was anything but - with a name like that.
The Woodchop carnival was for talent of all ages, gender or nationality, for example, a New Zealander, Sheree Taylor, was All-Round Lumber Jill title winner at the Lumberjack World Championship in the USA.
Guess what? A fishing competition was the other attraction. (Byron Shire News)
The timber blocks for the wood chop are of plantation timber and are of a certain standard and are covered and dampened with water before the events.
Brunswick Heads was bursting with holiday campers and caravaners and appeared to be in the style of a holiday town with an original flavour complete with a hugh tent run by the evangelical church folk who seem to appear, hear and there, during the holidays, to reachout to young people. The town is not far from the deep North.
In contrast, Byron, the next port of call, is nice but is a different kettle of fish.
Posted by julia at 11:54 am