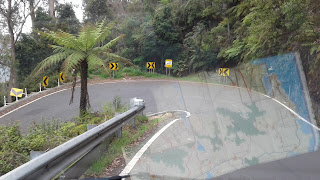 The Macquarie Pass is a terrific route to take from sea level up to the Southern Highlands NSW.  West of Albion Park the coastal strip meets the steep escarpment and the motorist is soon up beside the once distant rock face along the very top and on into Robertson not forgetting a pie shop there.
The drive is relatively short past appealing thick greenery and tall trees and fresh air with glimpses out over the sides to the coast far below and hairpin bends are a feature.  It is not a major route, is in good shape and busy enough.  It is one of several roads from the coast but it has the edge.
The reflection of the maps spread on the dash is not a good look.  Despite the devices, map reading is still an old habit. 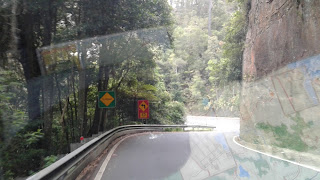 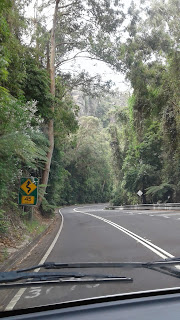 I imagine a road like that would be quite a challenge to the cyclists.