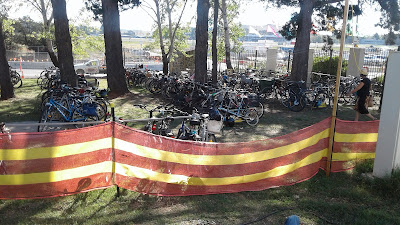 Pile of bikes.  This is not in China but is in the national capital at the folk fest.  Could be that at the same time as the Chinese are giving up their good habits around cycling we are seeking to increase the number of cyclists.
Canberra has caught the light rail bug - the latest 'must have' and a construction zone is beyond the trees and bikes.  Cruise down Northbourne Avenue in a state of mild disbelief along one long construction zone with speed restrictions and its share of chaos.
So our valley and Canberra have at least two points in common - light rail pioneering and drought. The district is as dry as, brown and dessicated plus water restrictions and very warm days and nights into autumn tho generally the trees had not turned golden or red which can be special where nature is usually evergreen grey or olive.
Return via the Southern highland for a totally different scene of green.