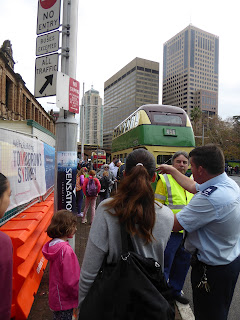 Mr and Mrs Obama and family are holidaying in Indonesia in several cities.  In the course of that can Obama charm the powers that be to keep on the straight and narrow?  Security and anti-terrorists activities could be hinted at but where to start as it may be seen differently by the 'man' on the street in that country.  Only a brave guest would be so bold.
Above, old double-deckers were taken out of moth balls for the day for excursions in Sydney amidst the chaos arising from new light rail construction.
Posted by julia at 9:58 am

Double deckers here are in service in the regular city bus system, as well as the tourist buses.