Below, Channel 7's gear at Nobbys Beach where visibility was very poor as we wait for the impact of a tropical storm which caused destruction in Queensland and on down the coastal areas of NSW.  The worst floods ever recorded along with a cluster of mini tornadoes hit Queensland. Major widespread floods occured in the same areas just two years ago.
Today the PM said that we are a smart and strong nation, when she visited one part of the hugh bushfires that had spread over vast areas in the eastern states and will possibly continue to occur in February.
If we were really smart and strong we would act to prevent climate change and these disasters.
The leader of the Opposition has a policy to end and undo Carbon credits. Not only that, this pathetic leader will not hear of a mining tax.

Newcastle's contribution to climate change is coal.  The Port Waratah Coal Services web site claims the operation of the world's largest and most efficient coal handling facility.  About 1200 vessels were loaded in the year and export tonnes was just over one million.
Their site is expanding over the island and infrastructure is built and a fourth berth and loader requiring dredging operations are full on.
We would never see developments like this for any of the basic things that we need in our community. Coal is King.

We are not alone in the race to sell coal.  Indonesia is ripping up the jungles of Kalimantan and exports even more than we do according to some figures and the USA is the fourth largest exporter of coal and is expanding a whole lot to meet the demand in Europe and Asia.
So, we are stuck in the age of coal.
Allied to climate change. Guilty of climate change.
Some years ago, a community meeting had people who were worried about the first conveyor belt on the island, the noise etc and tree plantings etc.  All that has tripled nowdays. Was the whole valley to be dug up for coal? Thats coming true. 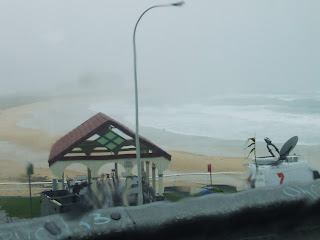 Above, stockpiles and a coal reclaimer close to a suburb. 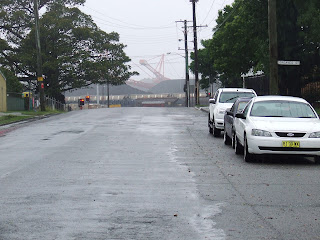 Above, fairly recent construction of a converyor belt it seems. 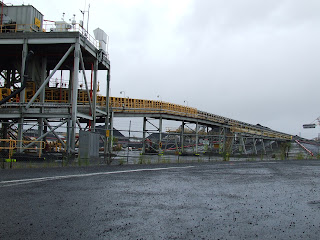 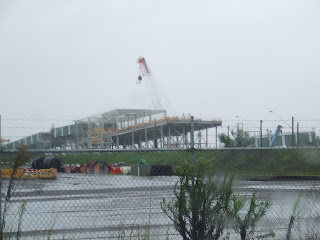 Above, Seems like contruction for a fourth coal loader
Posted by julia at 11:02 pm

Great post Julia. Keep fighting the good fight! Here in Pittsburgh we're battling natural gas "fracking" and just south of us, in West Virginia, everyone wanted to fire Obama because he dared to question coal.

The groundswell is slowly gaining momentum - but I can't still believe people go on about global warming being an "inexact science" puhleese!