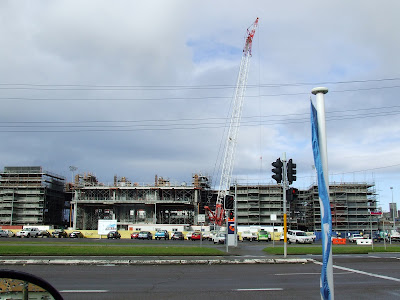 The new stadium at Broadmeadow is 'moving forward' slowly and steadily even if it does not look exactly like a stadium.

Mega events like the Commonwealth Games usually have very important officials representing the organization swaning around on location. These chaps will simply have to lift their game and take responsibility for the finishing touches and get the facilities in New Delhi in order.
For guidance on this task don't take a look at a fun TV series where mythical Sydney Olympic CEOs bungled their way through to the great day just ten years ago.
In real life, the ex-Fairfax newspaper building in Ultimo became the early stronghold of the Sydney Olympic organizing committee. Later-on the building went to the University after a classy make-over in glass.
Posted by julia at 4:15 am